Story Behind The Song “See Them Walk”

“See Them Walk” by: Jordy Christo 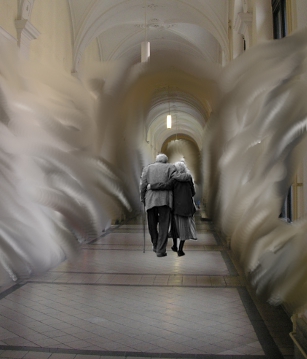 This is one of the first songs in which there was a recognizable prompting from God through imagery given to me. I think it was in 1984 when I wrote this.

I was going to Bay Shore Mennonite church at the time and married to my first wife. There was a very long walkway on the north side of the church which extended from south to north. I was at the south end and looked down the hallway. God captured my attention as an elderly man and woman were slowly walking away from me at the far end of the hall. As I write this now, twenty-eight years later, I can still see the divinely-inspired image of the couple I saw. They were locked arm-in-arm and both of them were stooped over as they slowly were making their way to the exit. Later that night I was inspired to write the song, “See Them Walk”. The opening line is: “See them walk hand- in-hand.” I recall my wife helping out with the lyrics and suggesting that the last verse of the song have a different melody to break the monotony of the tune.

For years I have called it the “Old Man, Old Lady” song. It has been a favorite among friends and family. I recorded a Youtube video of myself playing it for two VERY special friends, Bob and Ruth, a few months back (2011) for their 60th anniversary. I decided to change the name to “See Them Walk” since the song had taken on the more personal meaning of honoring their having spent a lifetime together. Any time now that someone tells me they have been married for decades, I openly smile, get excited and applaud them. If you are married or have ever been, you’ll understand why I do this.

This entry was posted in Song Inspirations. Bookmark the permalink.

One Response to Story Behind The Song “See Them Walk”